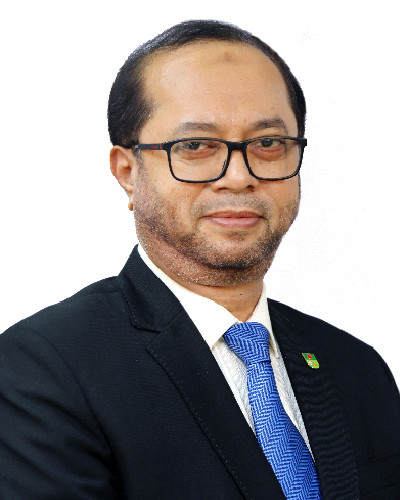 Mohammed Monirul Moula, an experienced and dynamic banker has been appointed as the Managing Director & CEO of Islami Bank Bangladesh Limited (IBBL) in January 2021.Prior to taking this position; he has served as Additional Managing Director & Head of Corporate Investment (Credit) Wing of the Bank. He also has contributed for the Bank as Head of Wings, Divisions, Zone and Branches. Mr. Monirul has started his career with IBBL on 6 March 1986as a "Probationary Officer". Joining as a Probationary Officer, he gained experience in all sections of the Bank over his 34 years of banking career. He was awarded “Letter of appreciation" for reducing Non-Performing Investment (Loan) by the Bank Management in the year 2004 and 2005. Mr. Monirul was the Head of Branches of Hathazari, Cox's Bazar, Anderkilla, Pahartali, Chowmuhoni and Agrabad Corporate branches. Then, he has been assigned as Head of Chattogram South Zone of the Bank. Then he has been posted as Head of Corporate Investment Division-II, one of the important division of the Bank. After joining as Head of Corporate Investment Division-II, he played significant role in Investment management like Corporate Finance, Sustainable Finance, Investment (Credit) Administration, Asset management and Investment (credit) Risk Management of the Bank. Then he was posted as Head of Retail Investment (Credit) Wing where he played significant role in the affairs of SME Finance, Retail, Consumer & Real Estate Investment and Rural Development Scheme. He was also the Chairman of Investment Committee (IC), Investment Risk Management Committee (IRMC). He was also member of Management Committee (MANCOM), Asset Liability Committee (ALCO), and Committee for Recruitment & Promotion (CRP) of the Bank. He was born in a noble family in 1963. He obtained Bachelor of Social Science (BSS) degree with Honors’ in 1983 and Masters of Social Science (MSS) in Economics in 1984 from the University of Chittagong. He is a Diplomaed Associate of the Institute of Bankers Bangladesh (DAIBB). Recently, he was awarded prestigious certificate on “Domestic and International Factoring" from Factors Chain International(FCI), Netherlands. He visited many countries like Thailand, Bahrain, Italy, Sri Lanka, KSA, Myanmar, Morocco, Malaysia, Indonesia, UAE & India for attending various conferences, seminars, trainings & business development programs.